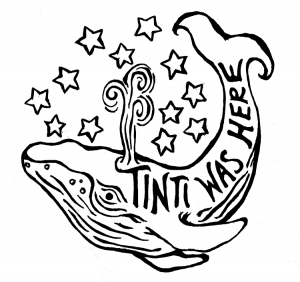 Karen Russell: I’m always curious where other writers begin. What was the first image you had for this book? Did you start with Hawley and his daughter, Loo, in their current lives, or did you begin with the secrets of Hawley’s past?

Hannah Tinti: The first spark of this novel came from my desire to write a love story. One of my favorite books is Jane Eyre, and the moment she meets Mr. Rochester is such an iconic scene—he is literally thrown at her feet. So I started by sketching out my own meeting of two people (which is actually still in the book—when Marshall washes up at Loo’s feet from the ocean). Once I had that boy and girl together, I wrote a paragraph for each of their backgrounds, and that included a description of the girl and her father clamming on the shore. Right away, the father began to dominate and take over the story. He was a lot more interesting than the boy or the girl. But what was his name? While walking through one of the old cemeteries in Salem, Massachusetts, where I grew up, I came across one that struck me: Samuel Hawley.

Hawley’s name and those brief paragraphs were fragments that I carried around with me for months. They didn’t come together until I sat down and wrote about the greasy pole. That was the breakthrough, and when the novel fell solidly into place. The Greasy Pole is based on a real contest that I grew up going to and still attend each year when I can. It takes place each summer in Gloucester, Massachusetts, during a celebration of Saint Peter, the patron saint of fishermen. A forty-five-foot pole is attached to a pier and set horizontally above the water, then covered with grease and lard. A flag is attached to the end. The first man who manages to walk the pole and reach the flag wins. These fishermen break their arms and smash out teeth as they slip off the pole into the harbor, all for the simple glory of capturing the flag and being carried through the streets in triumph.

I put the character Samuel Hawley on that pole and began to sketch out a scene. When his turn came to enter the contest, I described him physically for the first time, and realized that his skin was covered with scars. Once the scars appeared, I wanted to know the stories behind them. Hawley’s body became a map of the book that I was going to write.

KR: The central conceit of the novel is that it weaves back and forth through time. Every other chapter dives into Samuel Hawley’s past life and tells the story of one of his “bullets”—a moment where he narrowly evaded being killed and earned another scar as a consequence. How did this fabulous idea come to you, and how is this structure important for the story you wanted to tell?

HT: I wrote the first bullet chapter to explore Hawley’s backstory. I needed to find out how he got those scars. The marks we carry on our physical bodies are full of memory—stories that usually only get shared with the people we’re most intimate with. That’s what I wanted to uncover. The more I wrote, the more intrigued I became with the idea of telling a man’s whole life this way—brief flashes of meaning, with many blank years inbetween that the reader would have to imagine. I began to write short pieces, skipping through Samuel Hawley’s criminal past, each story revealing one moment where he’d found a way to keep living, starting when he was sixteen, and ending when he was nearly fifty.

While the past drives much of the novel, I wanted it to be in conversation with the present, and for objects and characters to jump back and forth between the two timelines. Each bullet adds another piece to the present narrative—which is held by Hawley’s daughter, Loo. In this way, the reader gets to be a detective, picking up clues and slowly filling in the picture. I wanted the structure of the book to be a call and response. The father’s experiences in the past and his daughter’s experiences in the present are intricately linked together—two separate coming of age stories that eventually flow together, like a confluence of two rivers.

KR: I love how the story ranges in setting all over the United States. Each time we turn the page, we might find ourselves in Alaska or the desert or the Midwest. How did you decide where to set Hawley’s bullet chapters? Did your travels over the years inform the book? And how did you come up with Olympus, Massachusetts, where Hawley lives in the present with Loo?

HT: Early on, I decided that with this book, I would write about places that I knew. Each of the settings are worlds I have visited or lived in, and feature bits of my own experiences. I’ve stayed at a great camp in the Adirondacks. I got caught in a dust storm in the middle of the Arizona desert. Whidbey Island is a place close to my heart, as is the ferry ride from Mulkiteo. I have visited prairie dog towns in Wyoming. And I’ve walked in midnight sun and watched Child’s Glacier calve in Alaska. As for Olympus, Massachusetts—where Hawley and Loo live—that is the only setting that is fictional in the book. I based it on Gloucester—home of the Greasy Pole, and a place where I lived for a year after college, waiting tables. I called the town Olympus in a nod to Greek mythology. It gave me some creative license and allowed me to shape the world of Hawley and Loo in more mythic proportions.

KR: Hawley reminds me of Clint Eastwood in an old spaghetti western—you’re a little frightened of him even as you root for him, but his essential goodness is never in doubt. How did you develop him as a character, and were movies an influence as you wrote?

HT: Movies are definitely an influence. I grew up with Star Wars and Indiana Jones. But also classic films like the Marx Brothers pictures and the original King Kong (1933). Because of this I tend to write with a focus on visual elements, and I’m very aware of pacing and the reader’s experience. I want them to be surprised and have fun and also to be emotionally moved. Like when you’re on a roller coaster, screaming with fear and dread and excitement and joy but at the end you get the wash of adrenaline and relief, and you stumble away grateful to be alive, stunned and maybe even a little weepy, and for a brief period of time the world is brought into a sharper focus.

As for Hawley, he became the beating heart of the novel as soon as he stepped onto the greasy pole. He takes part in the contest not for glory, but to help his daughter. This act opened up the idea of the reluctant hero for me. I started reading myths and looking at heroes in different cultures and finally landed on Hercules (a.k.a. Herakles). Famed for his twelve labors, and rewarded by the gods—Hercules set out on his quest after murdering his own wife and children, and later committed more terrible acts. Say the name Hercules, though, and a strong and powerful man comes to mind. A legendary hero.
I took the structure of Hercules’s myth and used it as a framework for Hawley. The number twelve also became important, not only because of its connection to the recording of time and the zodiac (which comes into play with Loo) but also because it set a challenge for me as a writer. How could I make a man get shot twelve times, and the reader know that he is going to get shot, and still make each episode feel unpredictable? I spent many years working that out. And over those years I fell for Samuel Hawley, who, despite all of his violent tendencies, is driven by the need to cure his own loneliness. He is on a desperate search for love.

KR: This is a book where some scary things happen. Yet it’s also a story about love and connection, especially between a parent and child. No matter what Hawley and Loo are going through, his desire to protect her is so clear to the reader. Can you talk a bit about how their relationship evolved as you wrote the book?

HT: In each of Loo’s chapters, she learns something. She starts by shooting her first gun. Then she has her first fight. Her first drink. Her first kiss. Her first job. Her first car. Her first heartbreak. And she also commits her first crime. Her father acts as her protector and teacher, until eventually Loo begins to forge her own path. Samuel Hawley is a classic masculine hero, tough and rugged. But as his daughter’s coming-of-age story intertwines with his own, Hawley ends up being saved by Loo—not once, but twice, and by the final chapter of the book, she is the one who rises. She becomes the true hero, and Hawley (like Hercules) takes his place among the stars.

KR: In addition to your writing, you’re known for your work as the co-founder and editor of one of my favorite literary magazines, One Story. How does being an editor inform what you do as a writer?

HT: One Story has been one of the greatest joys and most rewarding experiences of my life. Together with Maribeth Batcha, I co-founded the magazine in 2002, and was editor in chief for fourteen years. I’m now executive editor. We’re a non-profit organization, and publish one story at a time, allowing authors to take center stage, and giving our subscribers an intimate, focused reading experience. When One Story launched we made the rule to never publish an author more than once, so we have run stories from over 250 different writers from around the world. Editing these diverse voices has been enormously educational, and made me acutely aware of how a reader is making his or her way through a story. It also makes me hard on myself. I constantly stop and tinker with sentences, and often can see only the flaws in my own work.

While that side can be hard to turn off at times, being an editor has been a great gift. It taught me to respect the magic that happens in the creative process, while also understanding the mechanics behind the page. It has provided a way for me to support and celebrate emerging writers, something I feel very strongly about. And it’s introduced me to a generous group of readers who love books as much as I do. I am thankful for the people I have met, and for the authors who have trusted me with their words, just as I am also grateful and trusting everyone reading this book—with my own.

KAREN RUSSELL, a native of Miami, was named a Pulitzer Finalist in 2012 for her first novel Swamplandia! She is also the author of two story collections published by Knopf: St. Lucy’s Home for Girls Raised by Wolves (2006) and Vampires in the Lemon Grove (2013), which, like Swamplandia!, was a New York Times bestseller, and a novella titled Sleep Donation published by Atavist Books in 2014. She was chosen as one of Granta’s Best Young American Novelists in 2007, and was named one of best 20 under 40 writers by The New Yorker. In 2013, she received a MacArthur Fellowship. Her short fiction has appeared in The New Yorker, Granta, Oxford American, Zoetrope, and Conjunctions. Four of her short stories have been selected for the Best American Short Stories volumes.