Why did you decide to set The Good Thief in New England?

I wanted my novel to take place in America in the 1800s, and New England felt like the perfect place. I grew up in Salem, Massachusetts—famous for the witch trials and as the birthplace of Nathaniel Hawthorne—so stepping into the time period was actually quite natural for me. Most of the houses in my neighborhood were built in the 1700s and 1800s, and it was not unusual to have a back staircase, or fireplaces in nearly every room, low ceilings or small latched pantry doors. Whenever my family worked outside in our small garden, we were constantly digging up things from the past—fragments of blue and white china plates, broken clay pipes, or crushed shells that used to line the path to a neighboring carriage house. Once, my grandmother found a Spanish Reale from the 1700s. This unearthing of tangible history, and being conscious every day of the people who have lived in places before you is something common in Europe and other parts of the world, but in America it is more unusual. In any event, it made a lasting impression on me, and has certainly wound its way throughout The Good Thief.

How did you come up with the title The Good Thief?

Originally I had planned to call the book Resurrection Men. Then, for a number of reasons, I had to change it. I was at a loss for a long time, and nothing seemed appropriate. Finally, I gave an early draft of the novel to my mother, who worked for many years as a librarian and has read more books than anyone else I know. She came up with The Good Thief, and as soon as she said it I knew it was the right title. There is a lot of stealing going on throughout the book, with mixed intentions and results. I also liked the biblical reference of the Good Thief (also known as Saint Dismas), who was one of the men crucified with Jesus Christ on Golgotha. His story is one of redemption, at the very last minute, and that suits this novel perfectly.

The Good Thief has been compared to the work of Robert Louis Stevenson and Charles Dickens. Did you set out to write an adventure tale?

It’s humbling to be compared with these master storytellers. Stevenson and Dickens were my heroes growing up, along with James Fenimore Cooper. I’m not sure if I set out purposely to write an adventure story, but once I had the first scene, I knew that was where I was headed, and I was certainly influenced by these great writers along the way. Who could forget the scene in Kidnapped where David Balfour climbs the empty staircase and nearly falls? Or when Magwitch appears on the moor in Great Expectations? Whenever I felt daunted by the task before me, I went back to this important lesson—write something that you would like to read yourself—and tried to put it in motion on the page. Once I started it was hard to stop. I like to fall into books; to read about strange places and about characters who make me care deeply. I also like to be surprised at what’s going to happen next.

What is a wishing stone? 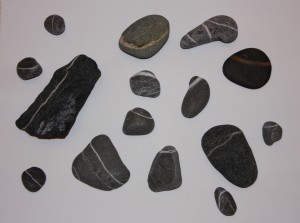 A wishing stone is a rock, usually found near water, with an unbroken white line circling it completely. It is good for making one wish come true. When I was a child I would collect them. Later, I was reintroduced to them at an important time in my life. At the beginning of The Good Thief, Ren comes into possession of one. It is his golden ticket, and this wish reverberates throughout the rest of the book, as do the stones themselves. Several people have asked me what a wishing stone looks like., Here are a few that I’ve held on to. Since The Good Thief was published, I’ve given one away at every reading, to pass on some of the good luck that has come my way.

How much did your religion influence The Good Thief?

I was raised Catholic and went to Catholic school, so my religion was certainly helpful, especially when it came to describing Ren’s spirituality. My relationship with God was very close when I was young, and grew more complicated as I got older. Children think of right and wrong in very literal terms—and they also respond viscerally to parables and storytelling in religious texts. For me, tales of the martyrs and saints always held great weight, and I tried to draw on them as I wrote Ren’s character. Saint Anthony, in particular, caught my imagination. In 2000, I had visited his basilica in Padua and read a history of his life. Not only was he a famous storyteller, like Benjamin—he was the saint prayed to for lost things, which fit with Ren’s missing hand. He was also involved in resurrection: one of his miracles was raising a boy from the dead. In the last days of his life, Saint Anthony lived in a tree house, wanting to be closer to heaven. It’s a poignant image—this desire to be rid of earthly life. As I wrote The Good Thief, Saint Anthony became my touchstone, and I consider him the patron saint of this book.

What kind of research did you do for The Good Thief?

Because I grew up in Salem, Massachusetts I knew how everything should look and what the feel of North Umbrage should be. But I also read many books on resurrection men, grave-robbing, and the history of medical schools. Two that were particularly helpful were The Italian Boy by Sarah Wise, a non-fiction account of the trial of two resurrection men in London, and The Knife Man by Wendy Moore, a biography of John Hunter, who was a famous surgeon and resurrectionist. I also went to the New York Public Library and read old newspapers from the 1800s that gave me a real feel for the language and every day lives of people. Museums were a great resource, especially the Mütter Museum at The College of Physicians in Philadelphia and The Peabody/Essex Museum in Salem. On the bulletin board over my desk I kept sketches of graveyards, shots of buildings from the 1800s, prayer cards, photographs of Native Americans by Edward S. Curtis, artwork by Lee Bontecou and Edward Gorey, pictures of ancient dentures and designs of early mousetraps, so that every time I looked up, I would stay in the world I had created.

Why did you choose Ralph Waldo Emerson’s quote to open The Good Thief?

I remembered Emerson’s words after writing about the mousetrap factory. I wanted to find the complete wording and add it to my folder of notes for the book, so I looked it up. When I re-read the entire quote I realized that it was more complex than I had thought: “If a man can write a better book, preach a better sermon, or make a better mousetrap than his neighbor, though he build his house in the woods, the world will make a beaten path to his door.” Emerson covered not only mousetraps, but religion as well as storytelling, the very thing I was struggling to accomplish. I put the quote on my wall, as a challenge to myself—to write a better book.

I try to follow my intuition—sitting quietly and letting things come. It’s a bit like using a divining rod. Often I don’t realize what I’m doing until after the words are on the page. Later, I go back and try and make sense of it. The editing process is where most of the work is done, but I discovered long ago that I need to be open and trust my subconscious. When I was a little girl, I went net-casting on a fishing boat. The men threw a net overboard, then dragged it a hundred yards, then pulled up what they caught into a big tank onboard. Then they tossed things over that they don’t want, and kept the fish they did. I remember that the water seemed so clear and empty, but when the fishermen pulled the net on board, it was full of the weirdest things I’d ever seen. Bizarre creatures from the bottom of the sea. Novels seem to be like this—casting a net through a writers’ mind and pulling the unexpected into the light.